When Jaques says "all the world's a stage," he's being more depressing than ever, but in a wise sort of way. For one thing, he draws our attention to the drama-rama that is day-to-day living. Well, that sounds about right. But what he's really doing here is reducing human life to an acting role.
Of course, Shakespeare also draws our attention to the fact that the guy saying all this really is nothing more than an actor performing a role on a stage. Shakespeare loves reminding his play-going audiences that they're at the theater, and he does it in just about all of his plays. Shakespeare's acting company worked in a theater called The Globe… sounds kind of like The World, right?)
Jaques breaks down all human life into seven stages:
[JACQUES]
All the world’s a stage,
And all the men and women merely players;
They have their exits and their entrances,
And one man in his time plays many parts,
His acts being seven ages. At first the infant,
Mewling and puking in the nurse’s arms;
And then the whining schoolboy, with his satchel
And shining morning face, creeping like snail
Unwillingly to school. And then the lover,
Sighing like furnace, with a woeful ballad
Made to his mistress’ eyebrow. Then a soldier,
Full of strange oaths, and bearded like the pard,
Jealous in honor, sudden and quick in quarrel,
Seeking the bubble reputation
Even in the cannon’s mouth. And then the justice,
In fair round belly with good capon lined,
With eyes severe and beard of formal cut,
Full of wise saws and modern instances;
And so he plays his part. The sixth age shifts
Into the lean and slippered pantaloon,
With spectacles on nose and pouch on side;
His youthful hose, well saved, a world too wide
For his shrunk shank; and his big manly voice,
Turning again toward childish treble, pipes
And whistles in his sound. Last scene of all,
That ends this strange eventful history,
Is second childishness and mere oblivion,
Sans teeth, sans eyes, sans taste, sans everything.
​In this speech, man essentially plays seven parts in his lifetime:​The whole seven-ages-of-man concept is pretty ancient. (We're talking Aristotle ancient.)
But Shakespeare just adds a little theatrical twist to it. Instead of just being about the ages of man, this speech is about the performance of these ages as well—on the stage that is the world. 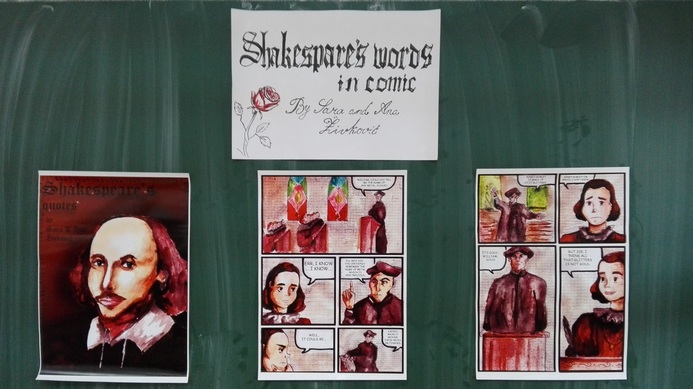 "Romeo i Julija"
Učesnici
Olivera Petrović - Julija, Radoš Bogdanović - Romeo, Anđelija Stambolović - dadilja, Ana Topalović i Aleksa Vesović - naratori, Marija Soldatović - autor adaptacije originalnog teksta i uvodničar.
ROMEO AND JULIET – MY PERSPECTIVE Marija Soldatović
I was asked by my professor, to try and adapt one of the most famed scenes from Romeo and Juliet, the balcony scene, to the modern times. It was a daunting task and I don’t think I could’ve done it without the entire class encouraging me and offering a helping hand through every step of the process. It went something like this:
Firstly, concerning the choice of which particular play to revise and adapt, so to speak, we couldn’t have made a better choice than Romeo and Juliet. It was a story already very well known to everyone but, even more than that, once I had refreshed my memory on that specific work of literature, it struck me that Romeo and Juliet were not much older than our students were, and their problems not much different than our own.
Determining the place and time for the play was a difficult task, seeing as Romeo and Juliet’s story is rather universal and there were many possible, and much more well-known couples than that of my two fictional characters that I could’ve chosen to play out what I had imagined. But, thankfully, I had help from all of the people involved in the performance, who were pitching in very good ideas that I only had to mold and fit into what I had already written out. It was suggested then that we should have Romeo and Juliet be nothing but ordinary teenagers, living at the same time as we all do. This allowed us far more freedom, in a sense, as I was enabled to incorporate some cultural references into the script itself and modify it so that it would hit close to home. It was actually a good friend of mine, Anđelija (the nanny), that recommended making use of the political crisis concerning relations between the US and Mexico as it resembled closely the feud between the Capulet and the Montague.
The characters have gone through many changes as well. It was only natural, for the actors portraying them have all added their own touch to their personalities and mannerisms. Whereas I had imagined Romeo as a bit mischievous but gallant young man, Radoš has given him more depth by showing an insecure side that I had not originally written into the script at all.
All in all, I find that the finished product was a success. We had an incredible time working on the final performance and I truly hope that we have all learned something and left the classroom that day feeling a little more appreciative of the brilliance and genius of one William Shakespeare.